You May Need These

In the middle of August

the first batch of 500×600mm ingots of super-large size was successfully produced in the casting factory.

the products of copper strips for transformer, frame materialsand white copper pipes used for ships which were produced by the company were awarded National Excellent Brand in the Non-ferrous Metal Industry.

the landmark New York, USA, the H-type Twin Tower on the First Avenue 626, was wrapped with 40,000 square meters of ultra-thin and ultra-wide copper strips for decoration. Luoyang Copper developed thetechnique of ultra-thin and ultra-wide decorative copper strips and overcametechnological difficulties relying on its independent innovation, becoming the only company that could produce this kind of products in China.

the thin-shell nickelic white copper pipe with the max diameter of 159mm in China and a thickness of 3mm was successfully produced in the pipe and bar factory and was delivered to customers.

An ultra-wide and ultra-thin copper strip with the specification of 0.2mm×1000mm was completed and delivered to customers.

an ultra-wide and ultra-thin copper strip with a specification of 0.2mm×960mm was successfully trial-produced.

The red copper pipe with an ultra-large diameter was successfully produced in the pipe and bar factory and delivered to users.

The AZ31B wrought magnesium alloy casting-rolling coil with a width of 1m, a thickness of 6.8mm was successfully produced in Chinalco Luoyang Copper.

The 300-ton hydraulic tensile machine introduced by Chinalco Luoyang Copper successfully produced a kind of ultra-large-diameter white bronze pipe with a diameter of 325mm, a shell thickness of 0.4mm and a length of 6m. Currently, it is the pipe with the max diameter and the thinnest shell in China and can substitute for imported ones.

In the middle of June

Commemorative coins for the 90th anniversary of the founding of the Communist Party of China, whose basic materials were coinage copper alloys developed and produced in Chinalco Luoyang Copper, were officially issued by People's Bank of China.

The project of high-precision electronic copper strips with the investment of RMB 2.2 billon was accepted.

Copper-plastic composite strips produced in Chinalco Luoyang Copper were shipped to Shanghai to be used for exterior wall decoration of main pavilions of Shanghai World Expo, including the China Railway Pavilion.

2009 Year Science and Technology Award in Nonferrous Metal Industry was evaluated and published. Methods for Mechanical Analysis of Copper and Its Alloys (GB/T5121—2008), which was established by Chinalco Luoyang Copper, won the first prize; The Development of Standard Samples of Pure Copper Series and Lead Brass and The Development of Ultrahigh-strength High-conductivity Be-Cu Alloys won the second and the third prizes respectively.

On April 17, Technology Research Center of Copper-Magnesium Alloy Processing Engineering of Henan Province, which was under the responsibility of Chinalco Luoyang Copper, was accepted by Henan Province.

A thin white 324mm×4.3mm copper pipe with ultra-large diameter was successfully produced in the pipe and bar factory, filling in a gap in this field in China. 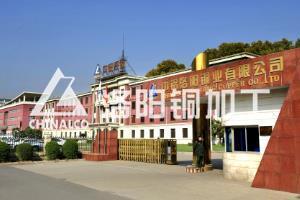 The project of 100,000-ton high-precision electronic copper plates and strips was launched.

The company’s production and marketing volume of non-ferrous metal products reached 100,000 tons for the first time.

The company obtained the practice qualification in hedging business of overseas futures upon the approval of the Document ZJQH ZI[2005] No.180 .

The company was identified as National Largest Export Enterprise of Copper and Its Alloys by Research Institute of Market Economy of Development Research Center of the State Council and other relevant departments.

The Technique Center of the company was jointly identified as state-level enterprise technology center by State Economic and Trade Commission, State Administration of Taxation and General Administration of Customs.

The technical reform project of copper pipe system which is invested RMB 83 million in upon the approval of State Development Planning Commission.

Luoyang Copper spent three years to introduce 19 sets of advanced equipments from Germany, Italy, England, Austria, America and other developed countries and built the most advanced production line of copper plates and strips in China.

State Development Planning Commission signed the Document (W)J(1983) No.657 to determine the technical reform of plate and strip system and the annual production of copper plates and strips as 60,000 tons.

The wide plate mill was tested successfully and the first large-scale red copper plate in China. The plate was made into a horizontal inscribed board of Military Museum of the Chinese People's Revolution.

The factory cast the first QAL9-4 aluminum bronze ingot in China using the semi-continuous casting process, with the specification of Φ195×4260mm.

Ministry of metallurgical industry decided to establish a production system of magnesium alloy sheets with an annual production of 1,200 tons in the Document (59) YFM ZI No.600.

Ministry of metallurgical industry issued the Document (57) YMSS ZI No.229 to approve the design specification on establishing a copper electrolytic system for Luoyang Non-ferrous Metals Processing Factory and determined its annual production scale as 50,000 tons of electrolytic copper by March, 1958.

National Construction Committee signed the Document No. 5604159 to approve the preliminary design of Luoyang Non-ferrous Metals Processing Factory and its audit agreement and determined its annual production scale as 60,000 tons of copper and its alloys.

Preparatory Office of Luoyang Non-ferrous Metals ProcessingFactory was set up.